There was a post on r/Belfast today from someone moving to Belfast looking to make a decision on where they wanted to live.

As any sane person would (who doesn’t drive), they wanted to find somewhere close to public transport routes, or to decide to go further out of the city for cheaper but still be able to get into work/school/uni/college/etc.

I’m moving to Belfast and trying to find somewhere to live. I don’t drive so I’m looking for places close to public transport, but I can’t seem to find any proper maps with the routes laid out. Translink’s site has some route maps which look similar to a tube map (http://www.translink.co.uk/Documents/Services/metro/Metro_schematic2.pdf[1] ), but without knowing the streets or surrounding ares I’m struggling to piece the routes together from names alone. For Dublin I can use something like http://hittheroad.ie/[2] to see the routes mapped out properly, but i can’t seem to find anything similar for Belfast. Does such a thing exist?

It took all my composure not to just respond with laughter.

There are several problems with this; it’s an open data problem and relies on one of two things happening;

There was talk a few years ago about making some ‘geo-checkin’ app for people to manually crowd-source the actual bus and train times and locations, circumventing not only the timetable-theiving accusation but also the need for LPS info.

Only problem is that you’d pretty much need every traveller in Belfast using it for at least a month before the variability of stops, times, buses, routes etc levelled out so that you could work out what the actual information was.

But the fundamental point, that is not new, or original, or even clever, is that if Translink simply dumped their data onto Google Transit, the following currently impossible things would happen automatically, instantly, at no ongoing cost to Translink or the public purse.

All in all, this is not just strikingly… no.. blindingly obvious as a ‘good thing’, but it would also save money, save lives, save time, make the place more attractive to business and tourism, and be so bloody easy that the fact that it hasn’t been done should be a major talking point outside of our wee development community who know exactly how easy this would be to pull off….

Bloody hell, just look at the transit companies covered by Google Transit at the minute, Northern Ireland is literally the least connected part of the UK.

You can get from Lands End to John O’Groats in just over a day, walking a grand total of 26 minutes. 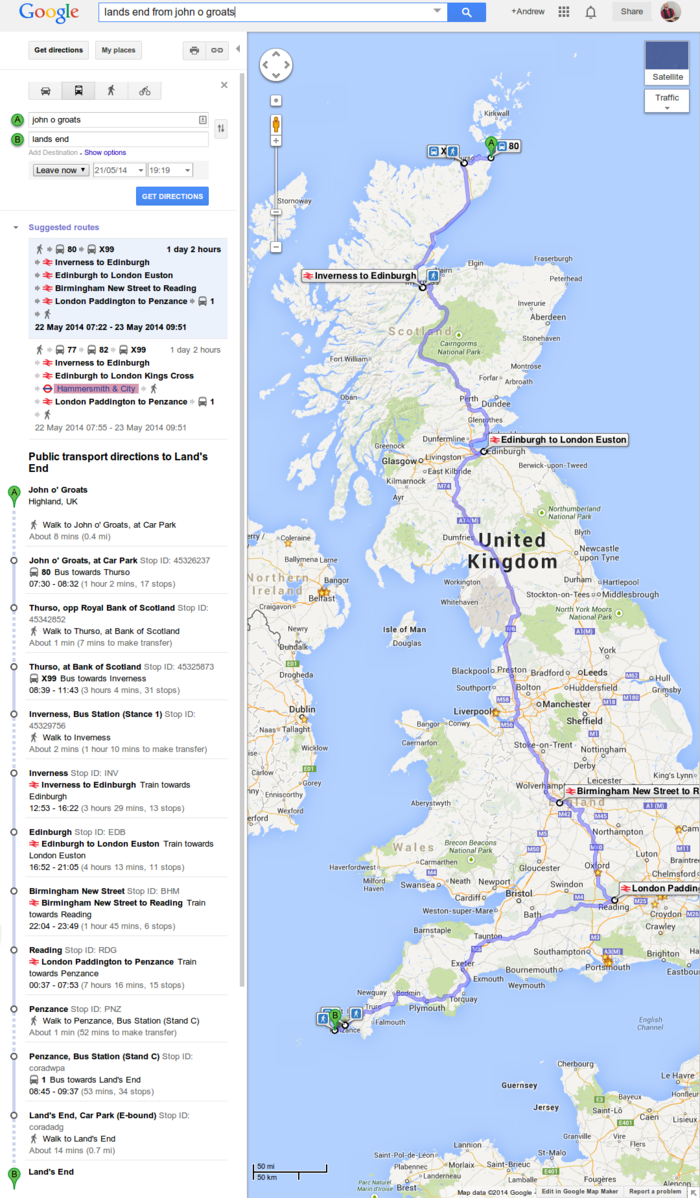 Contrast that with Derry to Belfast in 6 and a half hours via Dublin because, that’s right BUS EIRANN SUBMIT THEIR DATA TO GOOGLE TRANSIT 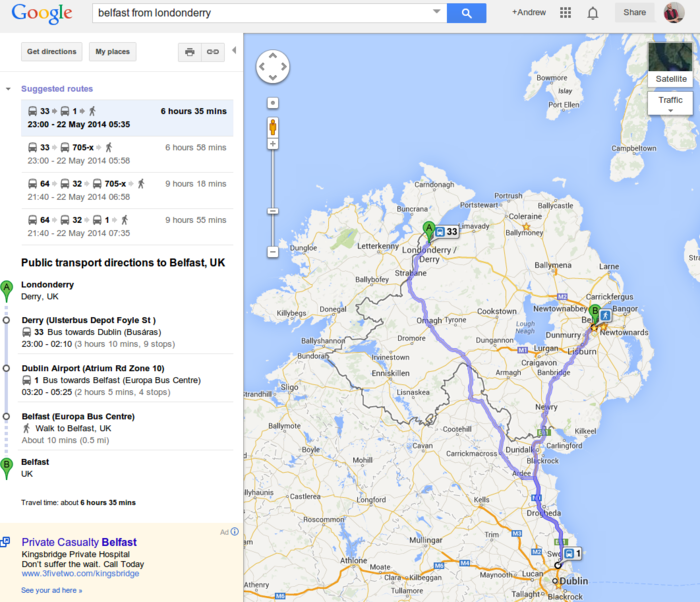