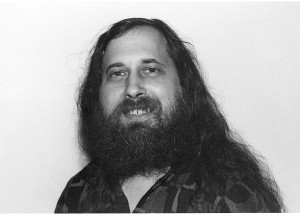 Richard Matthew Stallman is a software developer and software freedom activist. Born in 1953, he attended Harvard starting in 1970 and graduated in 1974 with a Bachelor of Arts in physics. From September 1974 to June 1975 he was a graduate student in physics at MIT.

Disclaimer, I had very little to do with the organisation of this event, I’m just a PR guy in this case

The Inimatible, parrot fancing,  founder of the Free Software Foundation, and the originator of the GNU operating system is coming to Belfast on Monday the 17th September.

The event is organised by the IET NI Local Committee, and is being hosted by the Northern Ireland Science Park.

This is a great opportunity for the FOSS and general software community in Belfast to get together for a right royal argument!

From his ‘Serious Biography’

Stallman pioneered the concept of copyleft, and is the main author of the GNU General Public License, the most widely used free software license, which implements copyleft.

Stallman gives speeches frequently about free software and related topics. Common speech titles include “The GNU Operating System and the Free Software movement”, “The Dangers of Software Patents”, and “Copyright and Community in the Age of the Computer Networks”. A fourth common topic consists of explaining the changes in version 3 of the GNU General Public License, which was released in June 2007. Another topic is “A Free Digital Society”, which treats several different threats to the freedom of computer users today.

In 1999, Stallman called for development of a free on-line encyclopedia through the means of inviting the public to contribute articles.

Stallman’s writings on free software issues can be found in Free Software, Free Society (GNU Press). He has received the following awards:

Needless to say, this pillar of the international software community, whether you agree with him or not, is definitely not to be missed. All the guys from Farset Labs will be there, fresh from our Synchronous Hackathon (Kindly Sponsored by Instil)

REGISTER FOR THE EVENT!

Its a busy week for the Belfast Tech scene actually, including the Big Data Bash