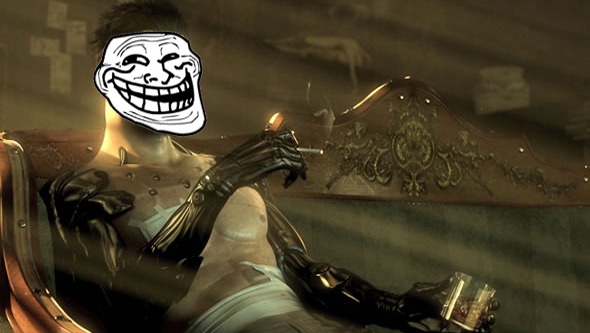 I voyage across the root-zones  in search for content. Movies available months before local DVD release in a format that my media centre laps up (mostly), I watch once, and don’t take up shelf space for years; TV shows via RSS that I watch at my leisure; and, on the rare occasion that I want to ‘Game’ and not feel like an idiot, I torrent.

Today was such a day; I’d had my old memories of Deus Ex (Otherwise known as ‘THE GREATEST GAME IN THE WORLD [Where the lead character can actually talk]) floating around for a week or so, and had locked off a Lazy Sunday to get back into it. Sunday rolls on, and I fire off a friendly torrent.

But Wait! You’re a Linux Fiend?! 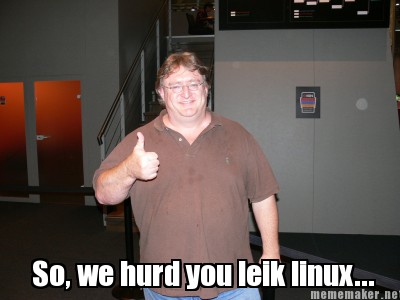 Now, the ‘fly’ in the ointment; I am a Ubuntu guy. As such, any time you want to install something ‘demanding’, you do a quick google to find out if it’ll work at all. Came across this article, and specifically, this phrase.

Do whatever you would normally do; run the installer from the DVD or download it from Steam – just make sure you do it in a new prefix in Vineyard.

I’ve used Valves digital distribution service for a few years on and off during my ‘PC’ phases, but had never tried it on Linux.

I already bought CodeWeavers for MS Office Support in Wine a few weeks ago, so may as well use their Wine engine for Gaming, right?

Three guesses what I image-searched for: answers on a self-addressed email to [email protected][/caption]

FYI, There’s a standing SHA1 issue with 64-bit Wine installs and a standing issue with the p11-kit crypto on 64bit systems. This is fixed (post Steam install) using the steam --no-isolate option.

It works! Logged on, answered some messages, and moved over to the store.

On a whim (a bump from £6 to £20, that I would never commit to in RL), decided to go for Human Revolution instead of GOTY, but the store has some… issues… under Wine (No surprise, it’s a web-embedded crypto nightmare!). No problem, Web interface lets me select and pay for my game with ease.

Currently downloading. As fast as the torrent was.

Oh, and I’ve bought two of the three DLC’s already. Total expense, about £24, translation: about 2/3 of a good night out in Belfast

This is what I always wanted; Stuff I wanted at a reasonable price in a reasonable timeframe, with the freedom to use them across my machines.

With Steam coming to Linux natively, and the rather public opinions being voiced by some of the biggest names in the gaming world regarding Win8, maybe…. no, I won’t say it. But maybe this is the year the playing field between Mac, Windows and Linux is leveled…

But What does it all mean?

Summary: I spent more in content than I have in the previous 6 months in one sitting because the experience was easy, I didn’t have to dual boot, and I don’t feel like a second class citizen. You want my money? Give me a good experience, stop wasting money on PR, advertising, and physical media.