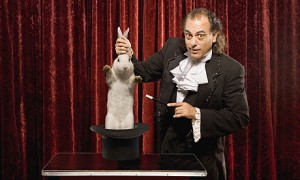 I was skimming through the Oral Statement from yesterday’s Assembly, with a specific interest in Dr Stephen Farry’s discussions on the NI Economic Activity Baseline Report (everyone loves Baseline reports these days, but very few ever seem to get followed up…) can came across a Question and Response between Sammy Douglas (E. Belfast) and Dr Farry.

Mr Douglas: […]Will he outline what his Department is doing to ensure that we are educating our young people in the skills that the workforce needs?

Dr Farry: […] We are significantly investing in science, technology engineering and mathematics (STEM) subjects, and there is an expansion of those subjects at undergraduate level. We have also extended by 60% through to 2015 the number of PhD places that are publicly funded in Northern Ireland.

Ok, great to see some support for far-looking research, however, Dr Farry, I have one question.

Where the hell are you getting a 60% increase in researchers from?

When I’m not at Farset Labs, I’m supposed to be based in ECIT; one of QUB’s major doctorate and post-doctorate research centres. This place has a capacity for 150+ researchers and staff; today I suspect that is closer to 20 max.

Of those 20 max, I would take a stab at saying 4 of those are local researchers, the remainder are international researchers who (and have every right to) come over for a few years, pay massive fees compared to local researchers, and leave with a qualification; taking the local effort, investment, and energy with them.

For the past 6 years (as far as I can remember), DEL funded studentships have been handed back to the department, because they literally cannot be filled. We went through a massive recession, and the ‘crippled’ private sector still took all of the graduate braintrust, with only a few masochists deciding to stick around.

So, ECIT might be a little bit of a microcosm. Looking a bit wider, most people know that my experience areas pretty much cover all STEM outreach activities.

Research careers… are not… pushed.

Organisations like STEMNET, and Young Enterprise have been pushed over the past decade or so to concentrate on hard industry; construction and manufacturing, with some ‘app developers’ and ‘graduate development analysts’ brought in in recent years from local and global software and consultancy companies. Little to no effort is put into saying “Hey kids; want 3 years to do a project that it totally yours, and get’s you letters before/after your name, and increases your average lifetime income by 7 figures, but is massively under paid compared to that entry level desk job your careers advisor showed you?”

So the question has to be asked; where is the pipeline for this proposal to have 60% more PhD researchers in STEM fields?

Is it all going to be in Biomed (which seems to be the vogue area at the minute)?

Is it all going to be wrapped up as Corporate “Knowledge Transfer Partnerships”, otherwise known as ‘cheap experimental labour’?

Is it just another aspect of the ‘I promise we’re actually good, I’ll show you in a few years’ attitude that local politicians seem to have towards our STEM ‘heritage’?