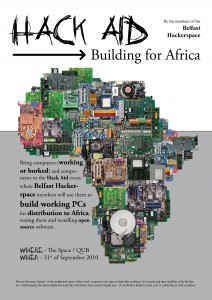 So we’re only a few weeks into developing this idea, and first I’m going to give some credit where credit’s due; the people that I’m working with this have been brilliant, I want to give special thanks (in no particular order) to Ryan Grieve (@thegrieve), David Kane, Ben Harrison, Martin Gilchrist (@Gilchrist_LLP), Jonny Milliken, Dan Reid, and Chris Murray (@kris18890).

Anywhere, where are we now?

Currently we’re trying to secure storage space from QUBSU, as well as negotiating using The Space as an exhibition area, working with Digital Circle to come to some partnership agreement, with two major event ideas;

All in all I think its going quite well!