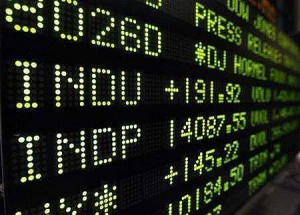 Remember that little economic apocalypse that happened a few years ago? You may remember it as the day your 401(k) dropped a digit or 3; those short sighted (w/b)ankers and middle management that essentially collectively said “You want some money? Sure, go ahead!” to the entire world and didn’t think about where it was coming from, while getting paid sums of money that would make Scrouge McDuck blush. Well, turns out they have been too greedy at home (no suprise).

The world of High Frequency Trading really started in the 1970’s, and originated as a system of electronic ‘shortcuts’ within the trading cycle, but eventually, by an economic form of feature creep, ended up leaving a significant majority of US and EU financial market holdings controlled by a variety of competing computer systems, trading on the fraction of a percent over a fraction of a second often generating over $100,000 a day for controlling interests. (As of 2009,  73% of US market equity was traded by such systems)

This led to a problem that is now bursting out from under the big firms such as Goldman Sachs (who have already had enough trouble surrounding their trading software); it has been a long standing pattern in finance that the money managers and executives basically swim in money. Meanwhile the analysts, by no means starving but, remain several steps down the food chain, and while that made sense and was completely ’fair’ when the money-men actually made functional decisions, in the age of Algorithmic trading, all the money-men do now is pick a horse and sit back. The horse trainers aren’t so happy with that state of affairs any more and are leaving en masse to start their own cottage mutual funds. While their horses are raking in six figures a day, these programmers may ‘only’ walk away with six figures a year, and the trainers are revolting.

The Forbes piece does a good job of covering the bases of the story, so I’m not going to repeat it too much. What I find more interesting about this is the increasing ‘variety’ in these algorithmic trading funds, and the great reduction in their available and invested capital; in mid 2009, GS had many trading days of $100,000,000+, generally controlled by one or two algorithms.

Moving this amount of money around makes waves in the market; the algorithms modelling the market are affecting the market, creating a feedback loop exactly the same as any number of age old speculation collapses, dating back to the South Sea Bubble in the 18th Century.

As recent history tells us, every bubble bursts, and some say (and I believe) that algorithmic trading had a much more significant part in the recent economic collapse than real-estate or credit-default swaps. Those factors are the ones that ‘burst’ recently; housing prices collapsed, the credit nation crumbled, but the algorithmic trading that perpetuated the economic bad decisions continues to this day.

If, instead of a handful of major financial companies with a handful of self-similar algorithms controlling a vast majority of the stock markets, there were dozens, or hundreds, or thousands of ‘High Frequency Trading’ funds, much like the Mutual Fund explosion in the 50’s and 60’s, the divergence and inherent competition will stabilize what is still a fragile market.

I’m currently brushing up on some economic theory through several books including Andy Kessler’s “How We Got Here”, and an oldie but a goodie, Benjamin Graham’s seminal book “The Intelligent Investor”, as well as some more up-to-date material such as Robert Shiller’s Yale Economics course Financial Markets, and in every instance of centralization of market control, a collapse soon follows.

But this time may be different (worse) because there was no / little punishment for those in control; they were ‘too big to fail’, and in their failure they managed to continue in bad financial practices while they got their legs back under them.

In conclusion, the diversification of High Frequency Trading through programmers and academics jumping the corporate ship and going independent, with smaller coffers and more variety, can only be a good thing for the market in general, providing a stabilizing variety for investors, and a string agitation on the feedback loop that got us in this mess (and also very good for anyone pursuing a career in high performance computing… cough**cough)