I had a bit of a surprise logging into my weekly stats-fest that is my Google Analytics account; 300% rise in Search Based traffic. My daily traffic is meagre to say the least but still, to see such a jump on the week-on-week numbers is always a good thing.

But I, like alot of people in this field, like knowing why! My first thought was that Google had recently sent out a press release governing updated search characteristics, and while I didn’t see anything relevant to my site in particular, its possible that general algorithmic tweaks could have slid me up the rankings.

Unfortunately I wasn’t satisfied with that explanation as it doesn’t explain that that 300% spike happened over one day; the 29th of April.   15 Visitors on the 28th, 55 on the 29th, Why? What happened on that day that would send people to my blog? 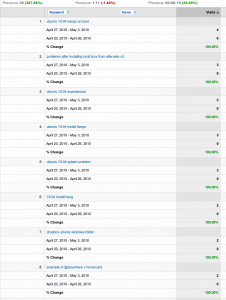 Mystery solved. Of course if I had taken a closer look at the keywords it might have become obvious

So word to the wise! Tag your posts and get in early!